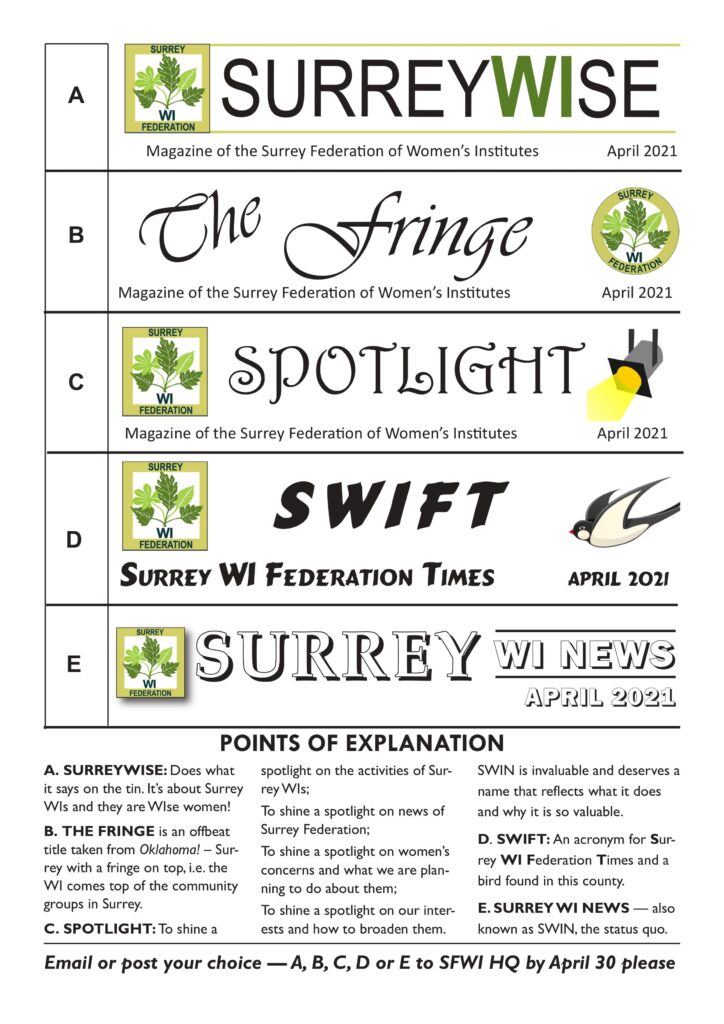 Choose a new name for SWIN

We asked you to suggest a new name for Surrey WI News, aka SWIN, our monthly Federation magazine.

Here is the shortlist of names have been put forward, and now it’s your turn to choose the one you prefer. 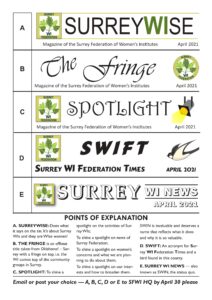 They have been presented to give you some idea of how each suggestion might look if it became the new title for the magazine. There are also explanations as to the reasoning behind each suggestion. If you wish, you can vote to keep the status quo (option E). Please submit your choice in one of the following ways: 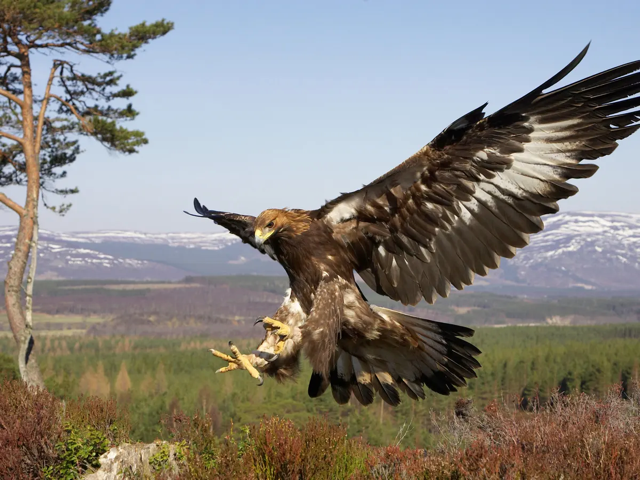 Please join us for a virtual meeting highlighting some of our stunning and iconic bird life with the RSPB.

END_OF_DOCUMENT_TOKEN_TO_BE_REPLACED 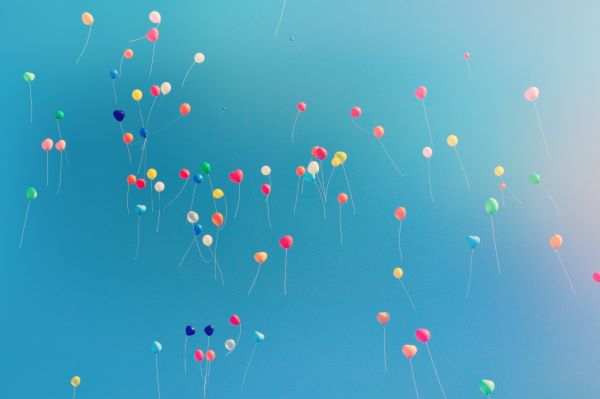 Up, up and away! SFWI’s first ever virtual balloon race!

END_OF_DOCUMENT_TOKEN_TO_BE_REPLACED 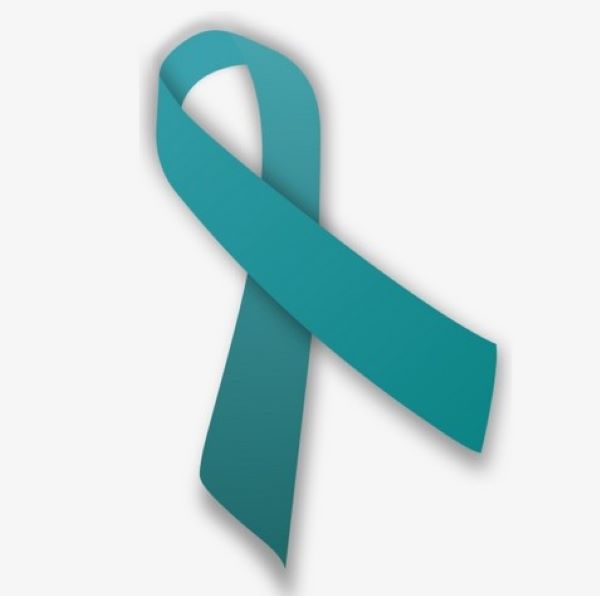 Ovarian Cancer – A Briefing for the 2021 Resolution

Please join us for a virtual meeting to hear about our latest resolution Ovarian Cancer.

END_OF_DOCUMENT_TOKEN_TO_BE_REPLACED 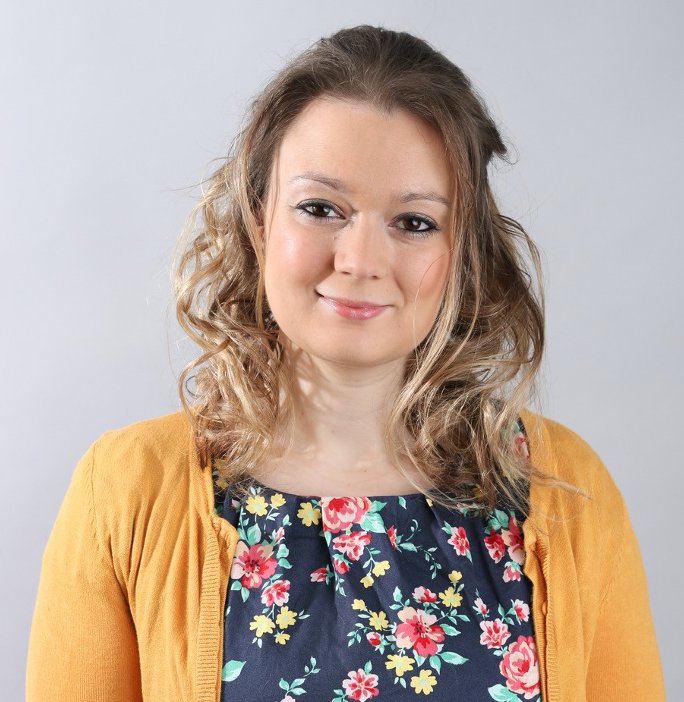 Behind the Scenes of the Great British Bakeoff

Please join us for a virtual meeting to get a rare glimpse behind the scenes of the Great British Bake Off!

END_OF_DOCUMENT_TOKEN_TO_BE_REPLACED 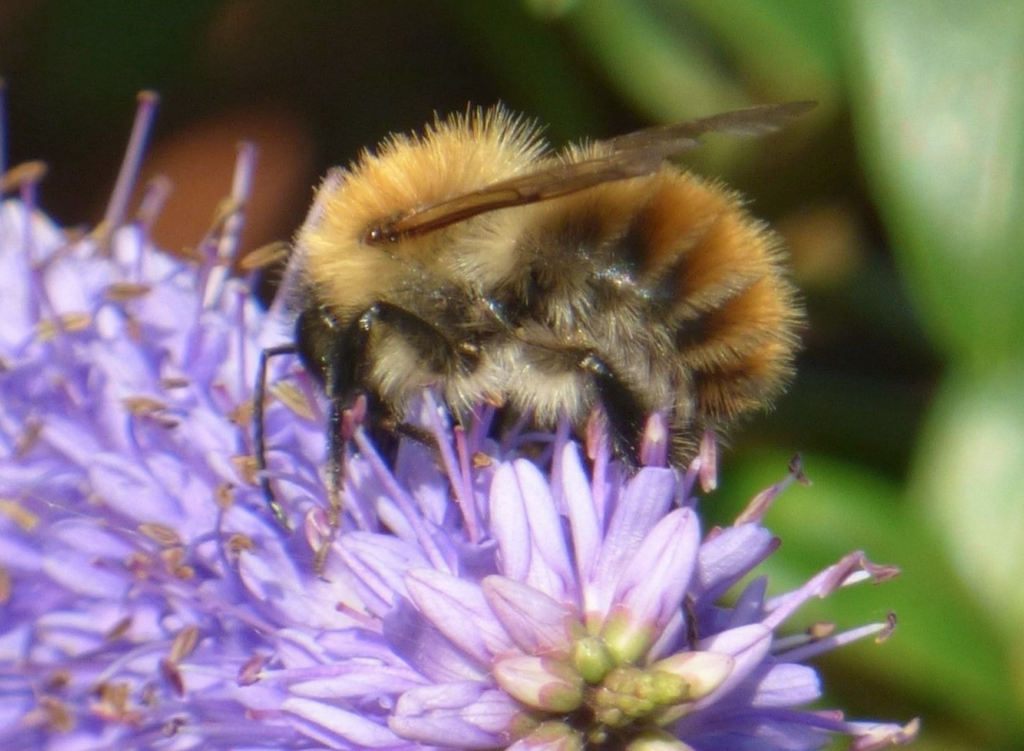 The Bees in Your Garden by Michelle Ernoult

Please join us for a virtual meeting to explore the wonderful world of Surrey bees.

END_OF_DOCUMENT_TOKEN_TO_BE_REPLACED 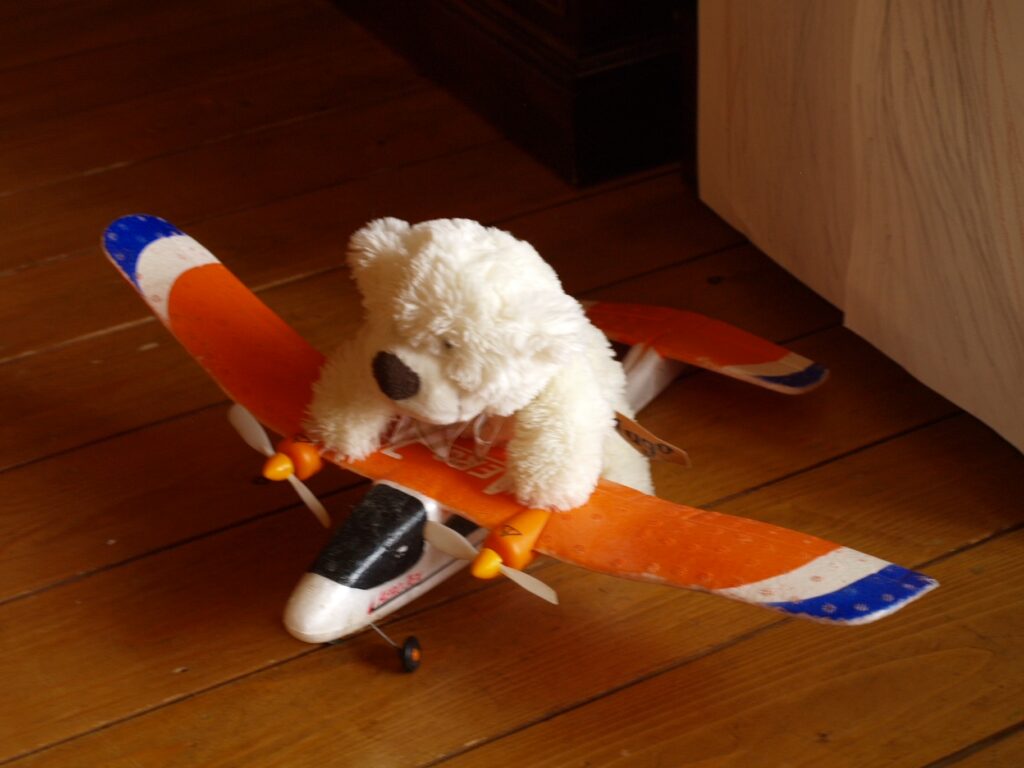 History of the Teddy Bear with Belinda Knox Spinks

Please join us for a virtual meeting to explore the world of teddy bears.

END_OF_DOCUMENT_TOKEN_TO_BE_REPLACED 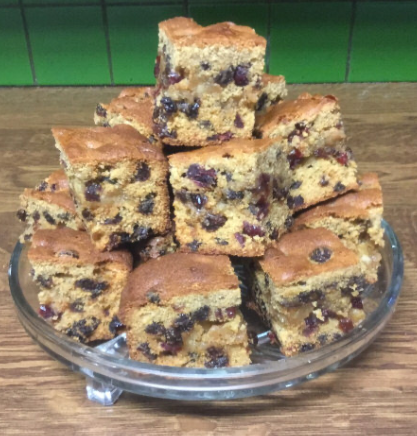 Give this Easter classic a try – Simnel Traybake

Give this Easter classic a try – Simnel Traybake

Originally Simnel cakes were baked by girls in service to take home on Mothering Sunday. It is now more usual to eat them at Easter with eleven almond paste ‘eggs’ on the top rep- resenting all the Apostles except Judas. 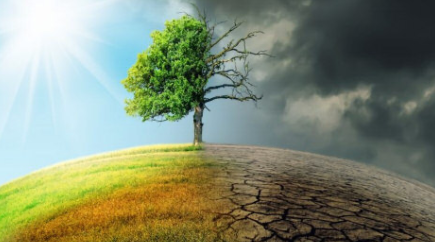 The threat of climate change has gone from something that’s going to happen ‘some day’ to something that is happening now. Hence, Climate Emergency!

Through the campaigns run by the WI we have learnt so much about how we, as individuals, can reduce the damage inflicted on our environment.WI members have been bold enough to put forward resolutions and then determined enough to follow them through. I have huge respect for their efforts.

We have hidden the clingfilm, mended our clothes, made soup using leftovers, walked to the shops with a shopping trolley, turned down the thermostat and put on a woolly jumper, changed our energy supplier to a renewable source — the list goes on.

I would be the last person to discourage these efforts. Individual changes to reduce our carbon footprint are good because they normalise those choices and encourage others to do the same, but on their own they are never going to be enough to achieve the level of change needed. We need to prioritise the health and wellbeing of ALL life over money and profit.

Last month many of you responded to the Show the Love campaign, part of the Climate Coalition’s response to the climate crisis.You made green hearts and displayed them where you could make an impact. The WI was one of the founder members of the Climate Coalition. MPs tell us that they don’t get much correspondence about the climate crisis from their constituents. We can change that — in your February WI Life there was a postcard for you to send to your MP.

A recent poll showed that 80% of the British public recognise that we have a climate emergency. There is no vaccine. No-one is immune.

A Private Member’s Bill introduced to Parliament in 2005 led directly to the 2008 Climate Change Act, at the time the most radical piece of legislation in the world. But we have more data now and we know that aiming for zero emissions by 2050 will be too late.

Why are we moving so slowly?

The measures that are needed may be unpopular. They won’t win votes. If I was an MP I wouldn’t want to risk losing my seat. BUT if my constituents were repeatedly asking me to take stronger action, I would be more confident.

The Climate and Ecology Emergency (CEE) Bill, is a Private Member’s Bill, and needs the support of over 200 MPs to progress through Parliament.It is a response to the precarious situation we find ourselves in and is rooted in science. Its three main points are:

We mustn’t get disheartened by our individual efforts’ we do make a difference with every decision that we make. We can encourage each other to contact our democratically elected representatives to support the CEE Bill so that we can approach the COP 26 meeting in Glasgow with confidence and determination.

Now where did I put that postcard? 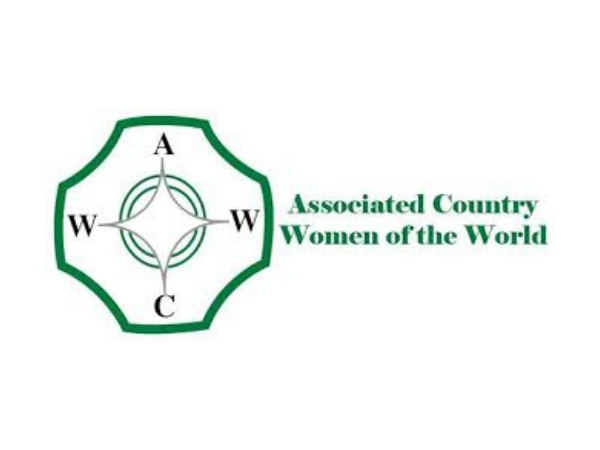 Invitation to tea with the World President!

Invitation to tea with the World President!

As Surrey’s ACWW Representative I was invited to a virtual tea party with our World President, Magdie de Kock. It was uplifting hearing my fellow representatives being acknowledged as they joined the meeting; it reinforced the feeling of being part of Women of the World uniting to work for women’s empowerment.