Protect our Pollinators – and our right to protest 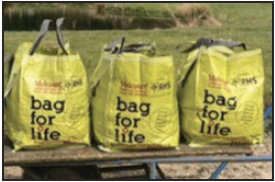 PROTECT OUR POLLINATORS – AND OUR RIGHT TO PROTEST

FOLLOWING on from April’s article about using peat free compost, I would like to draw your attention to a new scheme. The Kingfisher Farm Shop* at Abinger has introduced a Bag for Life Compost scheme to reduce single use plastic consumption. They are providing Melcourt Sylvia Grow Multi Purpose peat free compost and Melcourts Bag for Life which can take up to 40L of peat free compost. The refillable bag (pictured) costs £2.95 and the compost £7 for 40L. Sounds like a bargain to me!

A new Bill progressing through Parliament has caused concern and needs to be addressed. The Police, Crime, Sentencing and Courts Bill has successfully received its second reading in the House of Commons.

What has this to do with the climate? Members of the public who are increasingly concerned about the climate crisis feel it is their right to protest peacefully, to put pressure on the Government to bring in stronger powers to reduce carbon emissions and build a sustainable economy. The measures needed to fulfill the Paris agreement have not been met. The Environment Bill has been delayed again and the Climate and Ecological Emergency Bill has yet to move from the first stage.

It was good to see the pictures of Surrey WI members holding placards in support of International Women’s Day. No doubt they were a little nervous, maybe excited even to express their feelings so publicly. It is important that we can stand up and express an opinion without getting a criminal record. Last Saturday I joined a group of friends spread out through the town with banners to ‘Protect Peaceful Protest’.  The Bill currently going through Parliament threatens to damage that right. Covid restrictions were adhered to and we had a lot of support. We have to remember that without protests, women would not have the vote and the UK Government would not have declared a Climate Emergency.

This month I want to focus on encouraging pollinators to your garden. When people say pollinators they usually mean honey bees but there are about 4,000 native pollinators in the UK. Bumble bees, solitary bees, honey bees, moths, flies, wasps, sawflies…

Different shapes and sizes are suited to different flowers eg. foxgloves and aquilegias have deep flowers which suit garden bumble bees, lavender and catmint are attractive to short tongued bumble bees and marjoram is visited by many different insects. Some plants can renew their nectar when an insect has enjoyed a feast, white dead nettle and borage are good at this and it ensures that they are pollinated.  Borage is also a pretty addition to Pimm’s!

What else can we do to encourage pollinators? Please don’t use insecticides. A Gardeners Question Time gardener was told as a lad: “If it moves slowly enough, step on it, if it doesn’t, leave it — it will probably kill something else”.

I am a fan of Dave Goulson. He was on Gardeners World recently showing us his garden. It wasn’t tidy, there was no bare soil but it was rich in plant life and insects. A parsnip left to go to seed was covered in blackfly, they obviously preferred it to the adjacent broad beans — a good example of letting nature take its course. Of course he knows what he’s doing and gives us the benefit of his experience. **

In 2016 he decided to do some research into bedding plants sold in garden centres and B&Q etc. Analysis showed that although the plants had the RHS logo and Perfect for Pollinators label they had been treated with insecticide and fungicide. These toxins were in the pollen of the majority of the plants on sale that were tested and could attract bees to poisonous nectar. Talk to the staff at the garden centre  about it next time you visit. Perhaps better to grow your flowers from seed and enjoy the buzz in your garden!

**The Garden Jungle by Dave Goulson.