Message from our Federation Chairman (November 2021)

By surreyfed November 2, 2021 News
No Comments 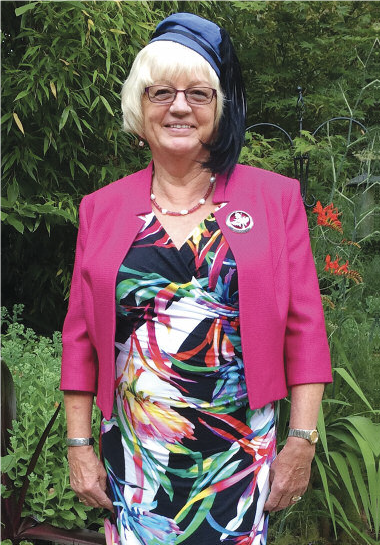 November is the month of remembrance, and this year it seems an especially poignant time as we
also remember those who lost their lives or were injured in the service of the Afghan people and, of
course, all who have lost their lives to Covid-19.
Many of you have already expressed a desire to offer help and support to the women of
Afghanistan. NFWI has produced detailed information, Take Action on Afghanistan that includes a
series of links which will enable you to do this in whatever way you choose.
As we approach Remembrance Sunday WI members from across Surrey will be commemorating the
day in many ways, attending Acts of Remembrance, laying wreaths, decorating their villages with
poppies — maybe as a topper for a letter box or, as with my WI, as a series of poppy-shaped wreaths
decorated with hundreds of poppies knitted by members that will be displayed in shop windows in
Bagshot.
Our county is home to two Commonwealth War Graves Commission (CWGC) cemeteries,
Brookwood, the organisation’s largest cemetery in the UK, and the Air Force Memorial at
Runnymede. Very many service dead are commemorated here, and amongst them are some of the
over 3,000 women who died during the two World Wars who served as pilots, in the Special
Operations Executive (SOE), as munition factory workers and on the battlefield. Also memorialised
are both suffragists and suffragettes.
A name that caught my attention on the memorial at Brookwood dedicated to those who died with
no known grave was that of Violette Szabo. She was a member of the SOE who, on her second
mission to France, was captured and tortured, but remarkably never gave up any information. She
was executed at Ravensbrück Concentration Camp. For her service she was posthumously awarded
the George Cross.
Intriguing
Were you fortunate enough to hear the recent Zoom talk Grandma Flew Spitfires about the women
of the Air Transport Auxiliary (ATA)? One of the women spoken of was Amy Johnson, who in 1930
flew the 11,000 miles from Britain to Australia solo! During WW II she joined the ATA, flying military
aircraft across the UK. She drowned in the Thames when her plane ran out of fuel. Her life is
commemorated on the astonishing RAF Memorial at Runnymede.
But remembrance is not just confined to the war dead and Remembrance Sunday. On a recent WI
tour of the Grade I listed Brookwood Cemetery my eyes were drawn to a cordoned off, vast area of
bare earth. This is to be the final resting place of around 50,000 bodies exhumed during the building
of the railway project HSR2.
Brookwood cemetery contains many extraordinary memorials to a fascinating array of people with
intriguing stories. However the most memorable is that related to the Columbarium, built to house
the ashes of those cremated. Its most recent addition was an anonymous blue floral urn containing
the ashes of an unknown person that was found in a local branch of Sainsbury’s!
Remembrance, or remembering, seems to have become a constant theme over the last 21 months,
whether it be a person, a place or an action. I sincerely hope that as we emerge from beneath the
shadow of the pandemic, we will look forward once again. But what we have experienced will be
forever recorded in history.
A final act of remembrance, that you may have contributed to is the Remember Me… online book of
remembrance which has raised funds to build a memorial in St Paul’s to commemorate the dead of
the Covid pandemic, the first of its kind to be installed there for over 100 years “as a reminder of the
human cost of the pandemic.”
I would, however, like to return to those women of the past, known and unknown, who gave their
lives for the benefit of all, and will finish with the poem by Leo Marks, given to Violette Szabo as she
returned to France for what would be the last time and which she used to encrypt coded messages.
It reads: