Message from our Federation Chairman (June 2022) 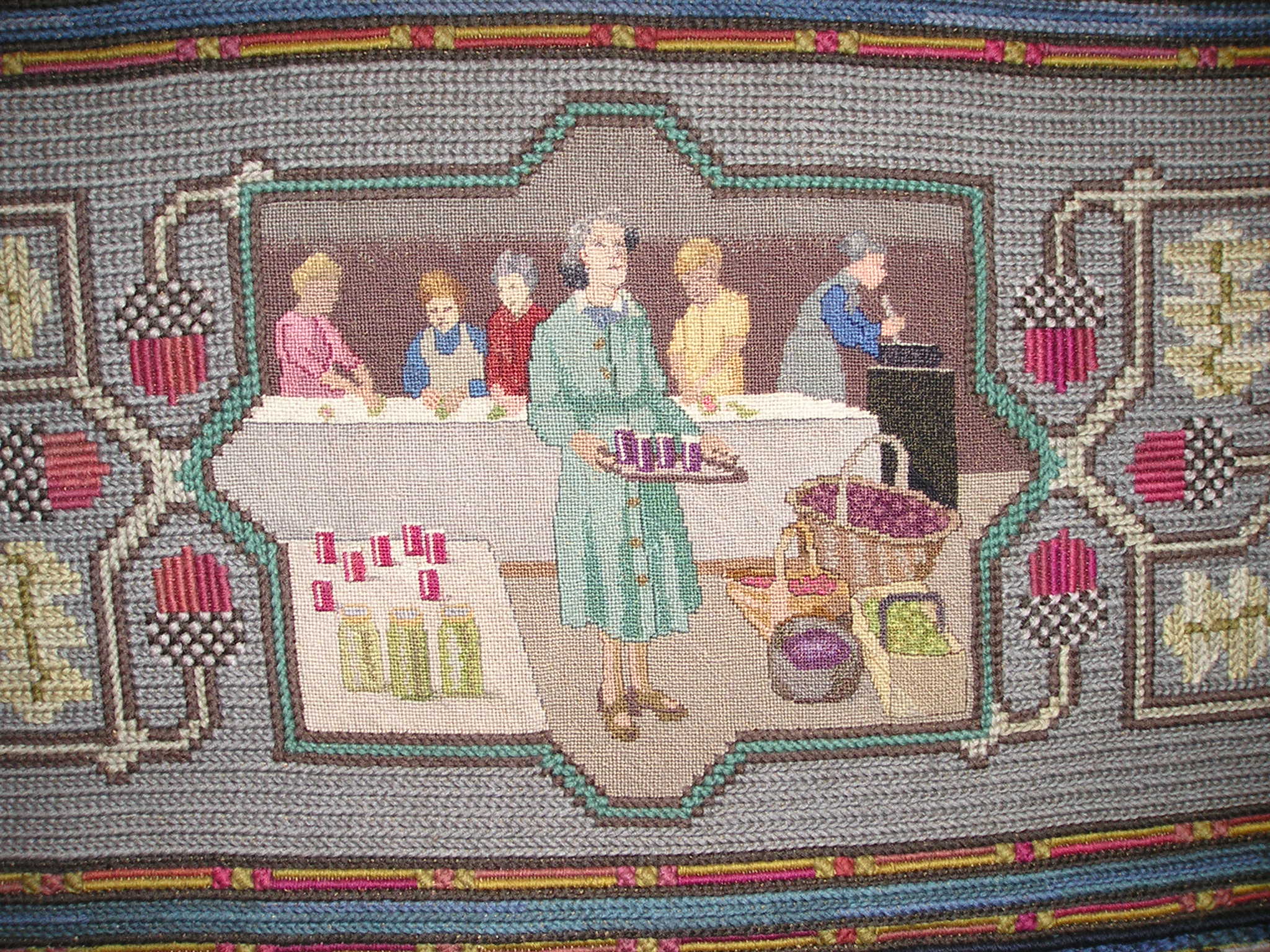 LOUISA CHAPMAN,  APRIL 9, 1867.   A name embroidered on a sampler on the wall of a cottage in Dorset. A woman I know nothing about, except that she was accomplished with a needle, and lived at a time of relatively little local historical significance. Yet I revisited that piece several times. Why? Because what it did and did not include was fascinating.

It was an image of England, Scotland, Wales and Ireland. On closer inspection I noted that it named only those cities that were of significance at the time. Non-existent were many of the well know cities I expected to see, very visible were the ports that told of a sea-going nation. What an intriguing artefact.

I was led to muse on how the story of the WI movement, our Federation and that of our WIs has been told through needlework, a craft that has long been synonymous with the WI. Participating as I did in the NFWI Centenary Fashion project with Kingston University, I had delved into the history of the WI as told through needlework. Two highly significant pieces, both created by or with input from WI members emerged.

The first, Work of Women at War, designed by Sybil Blunt in 1946 and made by WI members, records in fifteen panels, with over two million stitches, the work undertaken by women during World War II. Sadly, it is in storage at the Imperial War Museum Duxford, but is illustrated online: https://www.iwm.org.uk/collections/ item/object/30083764. [Above, the control room, more pictures on Page 7].

The second, The Country Wife mural, is a stump work piece, designed by Constance Howard and made for the great exhibition of 1951. Once hung at Denman, it is now undergoing renovation at the National Needlework Archive, housed in the former chapel at what was the Greenham Common Airbase.

It is particularly fascinating, not only as a piece of social history that illustrates the everyday crafts skills of women, but also because it incorporates examples of the crafts themselves in miniature, many made by expert WI members — a cane chair, a lace making cushion complete with bobbins, a hobby horse being amongst many examples. It is being restored on a huge frame by conservators working from both above and below. To observe the process is awe inspiring in both its detail and skill.

WIs across the county have told their stories in needlework many times; the wonderful banners that were paraded at our centenary celebration in Guildford Cathedral, the fascinating and varied embroidered panels that commemorate the Federation’s 75th, 90th and 95th anniversaries, that are displayed at HQ and in the Federation publication Stitches in Time which also provides the rationale for their creation and the significance of their symbolism. My particular favourite is Smallfield WI’s piece that depicts the burial of a circus elephant on the village green.

Another highly significant needlework collection is to be found in our centenary books. Each WI contributed a piece of artwork plus a written account of the history of their WI. All manner of media were used, but needlework predominates. This extraordinary account of the Federation’s history, to which very many of you contributed, can also be seen at HQ.

The most recent piece of stunning Federation embroidery, which graces the top table at our meetings, is the logo created by our treasurer Sheena Landgraf. It is an exquisite piece and worthy of close scrutiny next time you come to a Dorking Halls Meeting.

Many WIs have also created their own art- works in embroidery, sometimes to celebrate, whilst at other times simply to record, a tablecloth or bunting for example. I recall a fascinating appliquéd Bayeux tapestry-style street scene created by the members of Streatham WI. What talent there is in our Federation!

More recently Creative Craftivism has become a peaceful mode of campaigning or communicating a message. Have you seen the arresting bunting created by Surrey Vixens Virtual WI that marked the anniversary of the murder of Sarah Everard? It displays the names and faces of 125 women that have been killed in the UK in the last year by men. This extraordinary piece of artwork has been displayed at Clapham Common and at our ACM.

It engages people in a way that the spoken word cannot. It is a terrible indictment of our society and communicates the message loudly and clearly that women have the right to exist in public and private spaces without fear of violence.

Have you made and displayed a Show the Love heart or a Big Green Week canary or a climate change scarf? Creative pieces can so easily stimulate forward thinking discussion.

Engagement with needlework has played a significant part in many of our lives during the last two Covid years — making scrubs for the NHS, quilts for charities such as Linus or simply sewing to ease the tension and stress of lockdown life.

In lieu of meetings at Bagshot WI, craft kits to make campaign hearts and Not in my Name keyrings were made for and very much appreciated by members. On our return to face-to-face meetings, the chance to sew together in a social environment created the opportunity to renew friendships and foster new ones.

Brightening up villages with post box toppers and poppy wreaths has been another way of enabling WIs to reconnect with their communities through needlecraft.

Over the last two years, participating in craft in general and sewing specifically, has been recognised as significantly contributing to well-being, in addition to creating and leaving behind a tangible record of the Covid pandemic.

As I take on my additional new role as Chairman of the Home Economics Sub-Committee, I hope that craft — and in particular needlework in its many forms — will enjoy a resurgence and one in which an increasing number of you will participate.

Whatever your past experience, I hope that we will get as much pleasure from the engagement it affords with others as we will from the tactile nature of thread and fabric, just as Louisa might have done in a tiny, candlelit cottage in Dorset some 150 years ago. Happy sewing all!