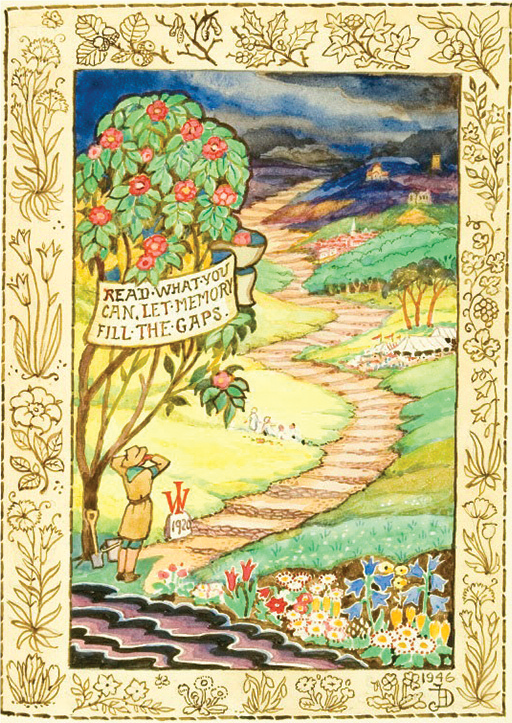 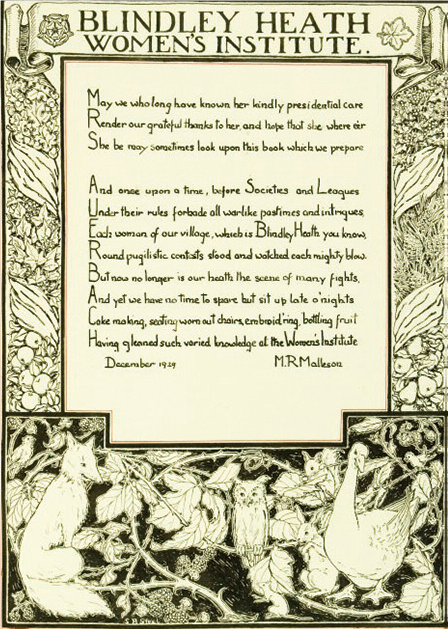 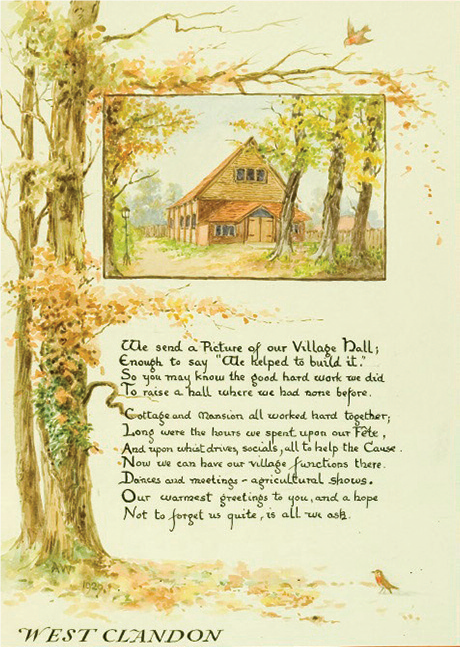 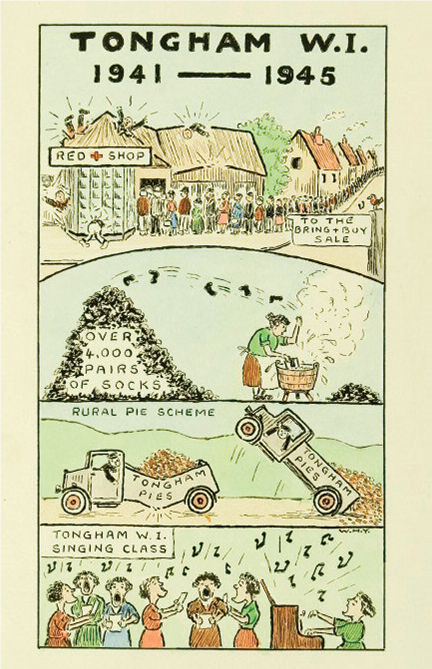 TWO albums made by WI members featured as Surrey Heritage Centre’s Marvel of the Month in May. We are grateful to the Centre for giving us  permission to reproduce some of these beautiful illustrations and an accompanying article which appeared on the centre’s website. The words contained in the Blindley Heath and West Clandon pages are at the bottom of this article. To see your WI’s contribution go to www.surreyarchives.org.uk/ then type 3410/4/1 (1930 album) or 3410/4/2 (1945 album) in the search box.

THE Federation’s archives include two presentation albums made for Mrs Helena Auerbach as an appreciation of her term of office as County President, 1919-1929, and for Miss Mary Kate Sutherland, County Secretary, 1920-1945. Both  contain illustrated pages contributed by each Surrey WI — 109 in Mrs Auerbach’s album, made in 1930, and 130 in Miss Sutherland’s, made in 1946.

The volumes contain paintings, drawings, photographs and verses, and there are many beautiful and charming  scenes which present a view of a surprisingly rural Surrey in the first half of the 20th century.

At Betchworth in Mrs Auerbach’s album, rabbits frolic in a meadow beneath gnarled old trees. The Blindley Heath page is decorated in the borders with fruit, pine cones and ivy leaves, while a fox, owl and goose peer from the brambles at the bottom of the page. Rowledge celebrated Alice Holt Forest in verse and depicted woodland animals,  birds and plants including a hedgehog, frog, toadstools and bluebell.

There is humour too — at nearby Hale the WI provided a photograph of members dressed up as a pack of cards for ‘living whist’ at Farnham Castle in 1925.

Other Institutes wrote verses or reports on their activities, such as the ladies of Blackheath who “sing top notes, sew cushions and found bobbed hair a help in acting Shakespeare”. At Hambledon “we have earned prizes for dancing, singing, bake new bread, spin yarn from sheep’s wool, cobble shoe or boot, cure colds, mend broken chair springs,

eat more fruit”, while at Haslemere “we’ve sung a lot of songs no angel dares”.

Fetcham highlighted traditional domestic expectations in a verse about the man of Fetcham who said “My supper’s cold mutton / My shirt lacks a button / For my wife has gone Institute mad”. The Shackleford page shows women cooking, knitting, tending chickens and babies, and playing a piano, but then, perhaps punning on their name (the branch banner drawn on the page shows a pair of shackles), a woman (is she breaking free?) drives off in a motor car.

Some WIs recalled entertaining visitors from deprived areas of London: verses on the Mickleham and Westhumble page, decorated with a snow-capped mountain and fantasy castle, recall “Parties we give for selves and others / Like Hoxton boys or Clapham mothers,” while Hurst Green had hosted 90 under-10s from a Bermondsey Council School and included the letter from one of the children, J. Fisher, who wrote that they liked the flowers, pigs, chickens, cows and lemonade.

Miss Sutherland’s album was completed in the immediate aftermath of the Second World War, but few of the pages refer to it, depicting instead familiar scenes such as the view from Box Hill or the church and cottages at Holmbury St Mary.

However, Hale WI added a photograph of their tableau of the Allied nations from 1942 and the illustrations on the page from Tongham 1941-1945 show a long queue winding down a village street to the Red Cross Bring and Buy sale, while below a woman adds to a pile of “over 4,000 pairs of socks” and a lorry groans along a road under the weight of “Tongham pies” in the Rural Pie Scheme.

Some express hopes in their verses for a new beginning, as at Bookham where the line “man’s crimes put out the lights and hushed the church bells’ chimes” is contrasted with the work of the WI “To link with others in a common band / And span dividing seas, dividing faiths / Till fear and hatred fade like mist-made wraiths / Into the radiance of a new world’s glow”.

Then as now, in the face of difficult times, it seems people found enjoyment and solace in the surroundings of  nature and the countryside, and Brockham WI hoped for “peace in this green and pleasant land”.

WORDS FROM THE ALBUMS

May we who long have known her kindly presidential care,

Render our grateful thanks to her and hope that she,

Where e’er she be, may sometimes look upon this book which we prepare.

And once upon a time, before Societies and Leagues

Under their rules forbade all warlike pastimes and intrigues,

Each woman of our village, which is Blindley Heath you know,

Round pugilistic contests stood and watched each mighty blow.

And yet we have no time to spare, but sit up late o’nights

Having gleaned such varied knowledge at the Women’s Institute.

We send a picture of our village hall

Enough to say “We helped to build it.”

So you may know the good hard work we did

To raise a hall where we had none before.

Cottage and mansion all worked hard together,

Long were the hours we spent upon our Fete,

And upon whist drives, socials, all to help the cause.

Now we can have our village functions there,

Our warmest greetings to you, and a hope

Not to forget us quite, is all we ask.